The lipid metabolism plays an important role in the development of cardiovascular diseases and type 2 diabetes. However, little is known about the molecular relationships. Using lipidomics, a modern analytical method, the team led by Dr. Fabian Eichelmann from DIfE and DZD identified those lipids that are statistically associated with cardiovascular disease and type 2 diabetes. In addition, the scientists found that a diet with an increased proportion of unsaturated fatty acids (FAs) leads to a reduction in risk-associated lipids and an increase in low-risk lipids. The findings were published in the journal Circulation. 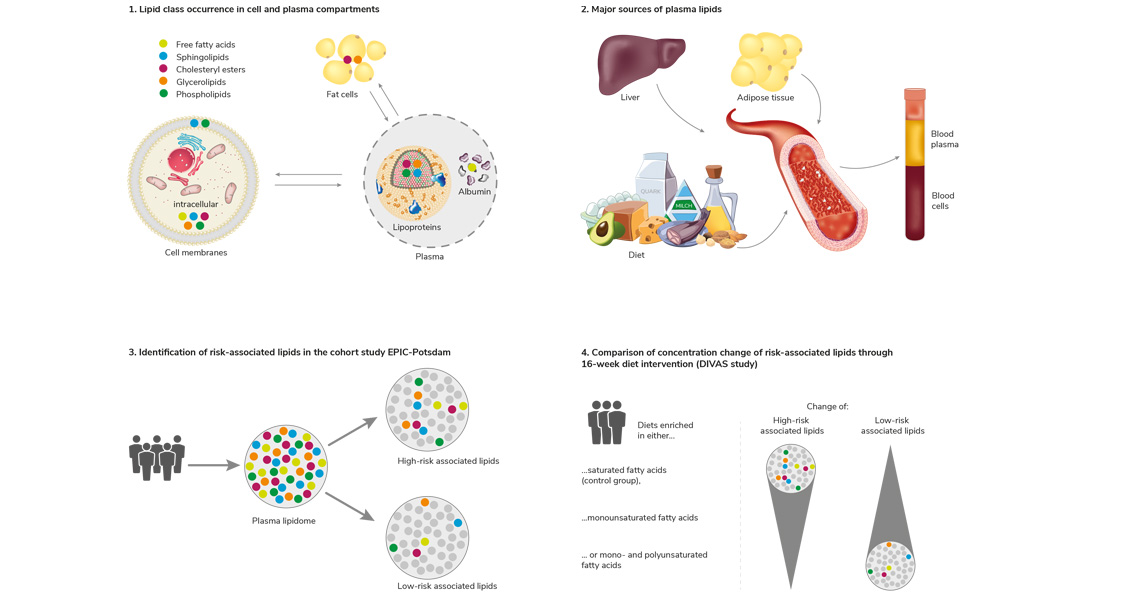 Cardiovascular disease is the leading cause of death worldwide, accounting for around 18 million deaths per year. People with type 2 diabetes have a two- to threefold increased risk of suffering a heart attack or stroke. The number of people affected has been rising steadily for decades. More than 8 million people in Germany already live with type 2 diabetes. According to scientific forecasts, these numbers will increase to around 12 million by 2040. Accordingly, there is a great need to identify biomarkers that can indicate the development of disease at an early stage in order to prevent or at least mitigate its onset.

Previous studies have shown that cardiovascular diseases and type 2 diabetes are closely linked to the lipid metabolism. To decipher these relationships at the molecular level, scientists have been using lipidomics analysis for several years. This is a modern analytical method that provides very detailed insights into the fatty acid profiles in blood plasma. Fatty acids occur in the human organism mainly as part of complex molecules, the lipids. Based on their molecular structure, they are classified into numerous different lipid classes and types. The totality of all lipids within an organism is called the lipidome.

Dr. Fabian Eichelmann, a researcher in the Department of Molecular Epidemiology at DIfE and scientist of the German Center for Diabetes Research (DZD), and his team evaluated the fatty acid profiles in 2,414 blood samples from the EPIC-Potsdam study. The samples were collected as early as the 1990s and in part came from participants who developed cardiovascular disease or type 2 diabetes in subsequent years. Using high-throughput lipidomics, the researchers identified a total of 282 different lipids, 69 of which were associated with at least one of the two diseases. "A statistical association with cardiovascular diseases was found for 49 lipids, which mainly belonged to the cholesterol esters and sphingolipids," said Eichelmann. “Twelve lipids were associated with type 2 diabetes, the majority of which were glycerol and phospholipids. An association with both diseases was seen for 8 lipids, among which several monoacylglycerides stood out.” At the molecular level, the researchers found that higher-risk lipids tended to contain mostly saturated fatty acids, particularly palmitic acid.

Using high-throughput lipidomics, the researchers identified a total of 282 different lipids, 69 of which were associated with at least one of the two diseases. "A statistical association with cardiovascular diseases was found for 49 lipids, which mainly belonged to the cholesterol esters and sphingolipids," said Eichelmann. “Twelve lipids were associated with type 2 diabetes, the majority of which were glycerol and phospholipids. An association with both diseases was seen for 8 lipids, among which several monoacylglycerides stood out.” At the molecular level, the researchers found that higher-risk lipids tended to contain mostly saturated fatty acids, particularly palmitic acid.

Lipidomics
Lipidomics is a branch of metabolomics.

It is used for the complete characterization of all lipids and their metabolites within an organism.

For modern lipidomics analyses, chromatographic and spectroscopic methods are combined in order to distinguish even very similar lipids from each other.

In the second part of their investigations, the scientists wanted to find out whether the risk-associated lipids could be influenced by changing the fatty acid composition of the diet. A 16-week intervention study conducted by the collaboration partners at the University of Reading in England was designed to provide answers. Julie Lovegrove's team recruited 113 healthy women and men aged 21 to 60 and randomly divided them into three groups. The first group received a diet with an increased amount of saturated FAs. The second group followed a diet high in monounsaturated FAs. And the third group was given a diet high in monounsaturated and polyunsaturated FAs. The diets were designed in such a way that the total energy intake was the same in all three groups, so that the participants neither gained nor lost weight. At the beginning of the study and four months later, blood samples were taken so that the researchers could determine and compare the fatty acid profiles in the blood plasma of the participants. "We found that the diets with an increased proportion of unsaturated FAs provided a reduction in risk-associated lipids and at the same time an increase in low-risk lipids compared to the diet with an increased proportion of saturated FAs," said Lovegrove, summarizing the results.

The lipids identified could serve as biomarkers of increased risk. Future risk prediction models could be based on them.

The findings support the common recommendation that replacing saturated fatty acids with unsaturated fatty acids in the diet is a potential tool for preventing cardiovascular disease and type 2 diabetes. "The lipids identified could serve as biomarkers of increased risk. Future risk prediction models could be based on them," said Professor Matthias Schulze, head of the Department of Molecular Epidemiology and principal investigator of the EPIC-Potsdam study at DIfE. In the next step, the researchers want to identify a lipidomics fingerprint in the blood that depicts the effects of a test diet and check whether it is associated with long-term risk of cardiovascular disease.

Recommendations for fat intake
At 9 kilocalories per gram, fat provides more than twice as many calories as the same amount of carbohydrate or protein, making it the most energy-dense nutrient. The German Nutrition Society (DGE) recommends that adults consume a maximum of 30 percent of their daily energy in the form of fat. For a healthy diet, however, the quality of fat is more important than the amount of fat.
Monounsaturated and polyunsaturated fatty acids, which are found in vegetable oils, nuts and fish, among other things, should make up the majority of dietary fat intake. Saturated fatty acids, which are found in particular in high-fat meat and dairy products, should only make up a small part of the daily fat intake.

The European Prospective Investigation into Cancer and Nutrition (EPIC)-Potsdam Study is a population-based prospective cohort study of DIfE. It is part of the EPIC study, one of the largest cohort studies in the world, which aims to investigate relationships between diet, nutritional status, lifestyle and environmental factors, as well as the incidence of cancer and other chronic diseases such as type 2 diabetes. In prospective cohort studies, a large group of healthy people are first extensively studied and then observed over a long period of time to see what diseases occur. The observations can provide clues to risk factors for common diseases.

The approximately 27,500 participants in the EPIC-Potsdam study were recruited and examined between 1994 and 1998; for example, their blood pressure and body measurements were determined. They were also questioned about their dietary habits and lifestyle, and blood samples were taken. During the follow-up period, which is still ongoing, the study participants have so far been queried six times about their dietary habits, lifestyle and any illnesses that have occurred. Since 2014, follow-up medical examinations have also been carried out to a limited extent.

The collaborative project FAME ("Fatty Acid Metabolism as a Marker of Nutrition and Cardiometabolic Health") was funded by the German Federal Ministry of Education and Research (BMBF) as part of the European Joint Programme Initiative "A Healthy Diet for a Healthy Life" (JPI HDHL). In this initiative, EU member states, associated states, as well as Canada and New Zealand are working together to pool and strengthen nutrition research across national borders. The aim of the transnational funding measure "Biomarkers for Nutrition and Health" of the JPI HDHL was to identify new biomarkers that can detect nutritional status and thus contribute to elucidating the links between diet and health. In addition to DIfE, the Universities of Navarra and Cordoba (Spain) as well as Reading and East Anglia (UK) were involved in the FAME network.