The DIfE ─ German Diabetes Risk Score (DRS), developed by the German Institute of Human Nutrition Potsdam-Rehbruecke (DIfE), has thus far enabled the prediction of the individual risk of developing type 2 diabetes within the next five years. Scientists from DIfE and the German Center for Diabetes Research (DZD) have now extended the prediction period to ten years, validated it in two independent study populations and correspondingly updated the DRS. 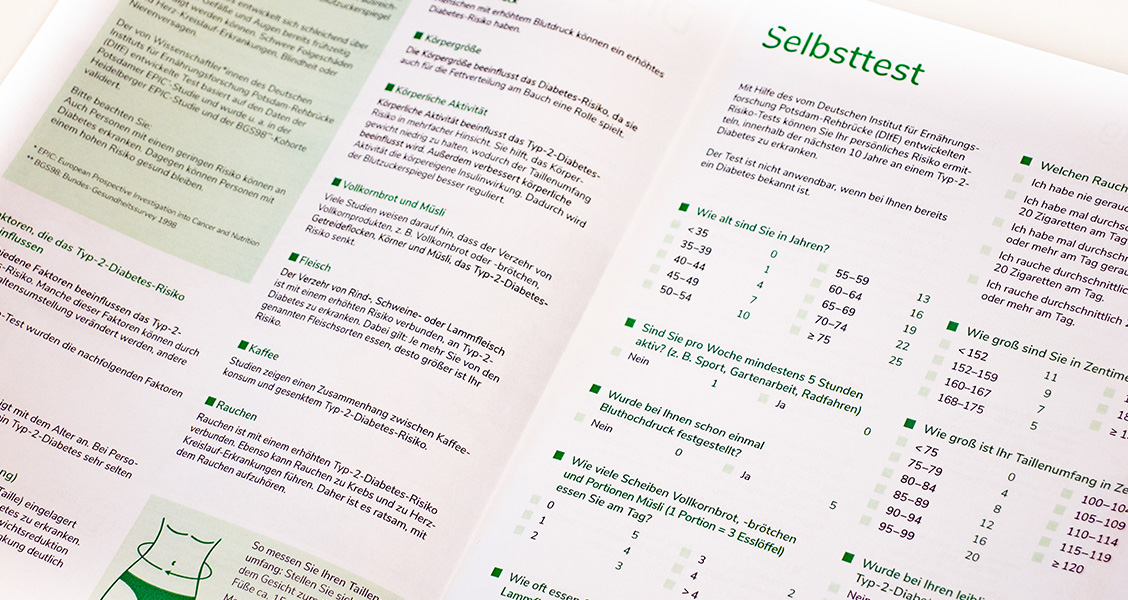 The DRS enables adults who have not previously been affected by diabetes to determine their individual risk of developing type 2 diabetes within the next 10 years. (Photo: DIfE)

According to the German Diabetes Association, there are over eight million people with type 2 diabetes in Germany. The number of unreported cases is estimated to be at least two million. In order to be able to identify people with a high risk of developing the disease at an early stage, DIfE scientists developed the DIfE ─ German Diabetes Risk Score (DRS) in 2007, which can be used outside of clinical practice.

The DRS offers adults between the ages of 18 and 79 the opportunity to fill out a questionnaire or take an online test at home to determine their individual risk of developing type 2 diabetes within the next five years, non-invasively and free of charge. The longer follow-up period of the EPIC Potsdam study on which it is based, which is now available, has allowed the DRS to be revised to predict the 10-year risk. "The extension of the prediction period enables even longer-term individual prediction of risk for type 2 diabetes," said Dr. Catarina Schiborn, first author and research associate in the Department of Molecular Epidemiology at DIfE. "This means that people at increased risk can be educated at an early stage and informed about options for risk reduction and lifestyle changes."

Lifestyle has a direct impact on the disease risk

For the further development of the prediction model, the scientists used the health and lifestyle data of around 25,000 participants in the EPIC-Potsdam study. Parameters that are relevant for the prediction of type 2 diabetes were included in the statistical modelling. These include unchangeable factors such as age, gender and family history of type 2 diabetes, as well as modifiable factors such as waist circumference, smoking habits, high blood pressure and physical activity. The model also takes dietary habits into account, such as the consumption of whole grain products and red meat.

Among the participants in the study, type 2 diabetes was diagnosed in 1,367 people within ten years of the initial examination. For the majority of those affected, the 10-year DRS was correct in its prediction. "In EPIC-Potsdam, the score predicted a higher risk for future patients with a probability of 83.4 percent than for those who did not develop diabetes in the future," Schiborn explained. The very good prediction quality could be confirmed in two independent samples – the population-based observational study EPIC-Heidelberg and in a sample representative for Germany, the BGS98 cohort. "This underlines the significance of the score for the German population," said Schiborn.

Wide range of applications due to different test variants

The extension of the risk prediction to ten years enables the updating of the previous DRS versions: the online test, the questionnaire self-test and the patient questionnaire for medical professionals, in which the diabetes risk can be specified together with the long-term blood glucose value (HbA1c value).

"The 10-year DRS offers a wide range of applications and can be used in everyday clinical practice for screening, as well as at home when clinical parameters are not available," said Professor Matthias Schulze, head of the Department of Molecular Epidemiology at DIfE. In addition, the updated DRS, like its predecessor, can be used in educational campaigns and population-wide screening procedures.

The online test to determine the diabetes risk score, which has been updated technically and as to content, is available at https://drs.dife.de/. It also includes a special feature: users have the option here of determining their individual 10-year risk not only for type 2 diabetes but also stroke and heart attack. The risks can be calculated individually or in parallel, as both tests contain common prediction parameters.

The new DRS self-test and the new DRS patient questionnaire are currently still in preparation.

The European Prospective Investigation into Cancer and Nutrition (EPIC) Study is a European collaborative project of prospective cohort studies in ten European countries with a total of around 521,000 study participants. It is one of the largest cohort studies in the world. EPIC was designed to investigate the relationships between diet, nutritional status, lifestyle and environmental factors, as well as the incidence of cancer and other chronic diseases such as type 2 diabetes.

The EPIC-Potsdam Study, also known as the Brandenburg Nutrition and Cancer Study (BEK), is a population-based prospective cohort study and part of the EPIC study. It includes around 27,500 participants. At the beginning of the study in the years 1994 to 1998, the subjects were between 35 and 64 years old. With its extensive database, the EPIC-Potsdam study serves as the basis for population-based epidemiological research at DIfE. The research results help to create the scientific basis for possible preventive measures and to improve the health of the population.

The BGS98 cohort consisted of almost 4,000 test persons aged 18 to 79 who took part in the nationwide questionnaire and examination surveys of the BGS98 and DEGS1.

The Federal Health Survey 1998 (BGS98) was conducted from 1997 to 1999 by the Robert Koch Institute (RKI). Health data were collected from 7,124 people between the ages of 18 and 79 in 120 cities and communities throughout Germany. The data were collected for all federal states at the same time according to uniform characteristics and under the same conditions. The BGS98 was thus the first representative Germany-wide study of the health status of the adult population.

The DEGS1 was the first survey wave of the study on the health of adults in Germany. It ran from 2008 to 2011 and was also carried out by the RKI. The focus was on examining the health status, health behavior and living conditions of the participants.